June 4, 2019 We received a company tour of 10 members of the Youth Club of the Amagasaki Industrial Association. It was planned for 1 hour 30 minutes by explanation of company outline, factory tour, question and answer with President Aoki, but information exchange became exciting and became 2 hour course. Thank you to everyone of the Amagasaki Industry Association
In 2019 June 5, Ltd. Golden Bridge’s request was received the visit of the person who 25 people of China Aerospace Technical Group Corporation. He visited our company as part of the training to learn quality control in Japan. After the factory tour, I was greatly excited by the lecture by Chairman Aoki. To China Aviation Technology Group Co., Ltd. “Thank you!” 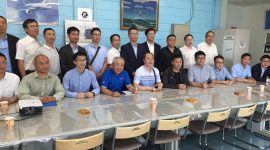 On May 22, 2019, 19 students of Kaimei High School second grader from Osaka visited us as part of Osaka manufacturing tourism. After explaining the company profile, we had a tour of the plant, a question-and-answer session with President Aoki, and a brief time, but I had a rich time. It seems that all the students are science-based, but they are not very interested in manufacturing. everyone! Manufacturing is fun!

Two donation boxes were set up in the company from April 2016, and we asked customers who came to the factory our to cooperate with the donations from the Higashi Osaka Rugby Fund, but on March 31st we will raise funds. We finished, and delivered the donations that we received on April 22 to Higashi Osaka City. Thank you for your cooperation.